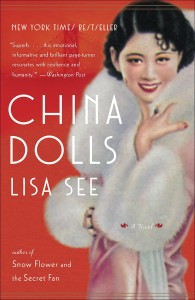 The author of Snow Flower and the Secret Fan, Peony in Love, and Shanghai Girls has garnered international acclaim for her great skill at rendering the intricate relationships of women and the complex meeting of history and fate. Now comes Lisa See’s highly anticipated new novel, China Dolls.

It’s 1938 in San Francisco: a world’s fair is preparing to open on Treasure Island, a war is brewing overseas, and the city is alive with possibilities. Grace, Helen, and Ruby, three young women from very different backgrounds, meet by chance at the exclusive and glamorous Forbidden City nightclub. Grace Lee, an American-born Chinese girl, has fled the Midwest with nothing but heartache, talent, and a pair of dancing shoes. Helen Fong lives with her extended family in Chinatown, where her traditional parents insist that she guard her reputation like a piece of jade. The stunning Ruby Tom challenges the boundaries of convention at every turn with her defiant attitude and no-holds-barred ambition.

The girls become fast friends, relying on one another through unexpected challenges and shifting fortunes. When their dark secrets are exposed and the invisible thread of fate binds them even tighter, they find the strength and resilience to reach for their dreams. But after the Japanese attack Pearl Harbor, paranoia and suspicion threaten to destroy their lives, and a shocking act of betrayal changes everything.

“They endure precarious careers, roller-coaster romances and personal conflicts, but the tone of the story truly darkens when Pearl Harbor is bombed and the United States declares war on Japan. Fear and paranoia sweep across the country, especially on the West Coast, where a large number of Japanese, including those born in the United States, are about to be “relocated.” Anti-Japanese furor erupts. “In Nashville, the Department of Conservation put in a requisition for six million licenses to ‘hunt Japs’ at a fee of two dollars each.” Time and Life magazines “offered diagrams and photos titled ‘How to Tell Japs from the Chinese’ and ‘How to Tell Your Friends from the Japs.’ ” Life explained that one could “spot a Jap by his dogmatic assertions, his insistence on pushing his arrogance in your face, and the way he could be counted on to laugh loudly at the wrong time.” “Every bush and tree looks like the enemy,” Helen says, using one of the many Chinese proverbs she often spouts, and Ruby, who is hiding her true ethnicity, feels she “was not only dancing on the edge of a volcano, she was looking down into its fiery center.” Someone informs on Ruby and she’s sent to the “Topaz War Relocation Center” in Utah. Who has betrayed her? What happens next? The conclusion of this emotional, informative and brilliant page-turner resonates with resilience and humanity. Zukerman is a flutist, writer, arts advocate and Internet video blogger.” — Washington Post (6/2)

“China Dolls is fresh and lively. When was the last time you read a novel about the “Chop Suey Circuit” of 20th-century American showbiz, an era less well known than the Borscht Belt and Chitlin’ Circuit? It’s a compelling story of a (thank goodness) bygone era, and See tells it well. She clearly has done her research — most of the major players in entertainment make an appearance or are mentioned in passing: Deanna Durbin toward the end of her career, in a film with music by bandleader Kay Kyser and his Kollege of Musical Knowledge; Ed Sullivan and Toast of the Town; Dorothy Kilgallen writing in her gossip column about “the enchanting Princess Tai”; Gary Cooper and Ingrid Bergman strolling across the Paramount lot. And See gives dozens of examples of songs from the era, from “I Cain’t Say No” and “Don’t Sit Under the Apple Tree” to peppy, offensive responses to Pearl Harbor such as “You’re a Sap, Mr. Jap.” (“You’re a sap, Mr. Jap / To make the Yankee cranky / You’re a sap, Mr. Jap / Uncle Sam is gonna spankee …”) She could have cut much of the period detail without harming the flow of the story, but what fascinating details. — LA Review of Books (6/16)

“China Dolls” plunges us into a fascinating history and offers an accessible meditation on themes that are still urgent in our contemporary world. The women’s story explores burning questions about the possibilities of friendship, the profound effects of betrayal, the horrors of prejudice and the nature of ambition – especially female ambition. Though love affairs abound in this book, the women’s central romance may be with their own artistry: their passion for the stage and hunger for glory in a world that belittles them at every turn. —San Francisco Chronicle (6/11)

“See keeps the momentum going — during wartime and afterward — with some pretty startling revelations about the women as they dance their way through hard times and good fortune. Grace, Helen and Ruby undergo painful experiences, but what keeps this novel from bogging down in sorrow is their exuberance and spirit. With three heroines who each nurture a fierce ambition to achieve the immigrant’s dream despite wartime society’s prejudice, See has crafted a captivating, profoundly American story. — Miami Herald

“Ultimately, “China Dolls” is a story built on friendship, meaning the three women will reconnect — on stage, as well as in real life — before it’s over. But never lost in the process is See’s portrayal of an era so different from our own, in which racial discrimination was treated with an easy acceptance that found its zenith with the Japanese internment camps but also seeped into arenas both large and small.

See shows Life magazine telling its readers how to distinguish the Japanese from Chinese according to height and complexion. “After decades of being inscrutable,” she writes, “suddenly Chinese could be identified by their placid, kindly and open expressions.”

Given an environment that tolerated such nonsense, what’s surprising is not how few Americans crossed the line to build relationships with those from a different racial background, but how many. The characters in “China Dolls” form their own rainbow coalition, but unintentionally, which seems like the best kind. —Seattle Times 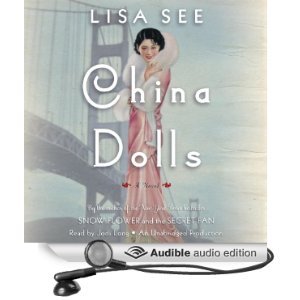