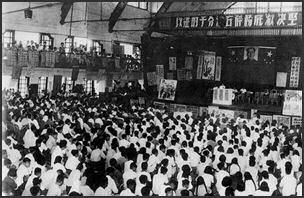 In April 1957 Mao Zedong launched a campaign called ” Letting a Hundred Flowers Bloom, a Hundred Schools of Thought Contend.”  This allowed the public to speak about controversial issues and criticism toward the government. The goal of this campaign was to improve their utopian society. Even Mao Zedong joined in the criticism of the communist society during his speech known as “The Correct Handling of Contradictions Among the People”. He hoped that letting people criticize would expose corruption of power. After 5 weeks though the government became tired of listening to “bourgeois rightist” thinking, and so began the Anti-Rightist Campaign. Click on Picture to learn more.

The Anti-Rightist Campaign was an effort to reform all the individual thinking of all the intellectuals. Many of the people who spoke of, or critisized the government were sent to labor camps to be “reeducated” in communist beliefs. Click on Picture to learn more.

The People’s Communes in China are collective units of up to 5000 families that all live and work together. Communes were created during the Great Leap Forward in order to surpass countries such as the United Kingdom and the United States. They were made official in 1958. In a commune everyone gave up ownerships of tools and animals. Everything was provided by the commune: schools, nurseries, health care for the elderly, even entertainment. All people were required to do was dedicate their lives to the commune. Today there are a few communes that still exist. One of them is the village of Nanjie where even today they still follow many of the rules back when Mao Zedong was in power.

Art-Deco is an architectural style that was created in Europe during the 1920s. This style was adopted in Shanghai because of its “thrusting vertical elements and geometric ornamentation that was able to capture the spirit of a rising city.” Deco style soon took over the “Paris of the East”. Shanghai became a city obsessed with the new and modern Art-Deco Style.

Around the world, Art-Deco style still remains very popular to this day. The houses and hotels located in The Bund in Shanghai is just one example. Other places include The New York Chrysler Building and the Hollywood Bowl in Los Angeles.

Art-Deco Style was not just used for buildings but furniture, jewelry, household objects such as lamps or known as scones. Click here to see examples of some Art-Deco Furniture

Today though much of the historical Art-Deco Style present in Shanghai is in danger of contruction companies looking to tear down history. Click herefor more information.

The Great Leap forward was a plan headed by Mao to overtake all superpowers such as The United States and The United Kingdom in 5 years. Click on Picture above to learn more.

This plan began to take effect in 1958 to 1961 where the country decided to use China’s vast population to rapidly transform the country and push it toward industrialization.

However, the Great Leap Forward ended in disaster. Instead of increasing the modernization of the country, it led to at least millions of deaths through starvation and poor conditions.

Click here to take a look at videos about the Great Leap Forward from CIA Archives.

Campaign Against the Four Evils

This campaign mostly focused on ridding China of four pests:

This campaign was launched by Mao Zedong in 1958 as a hygiene campaign. The purpose of was to eliminate four pests which were rats, flies, mosquitoes, and sparrows.  Mostly this campaign wanted to kill the sparrows because they ate the grain seeds farmers planted. It ended up backfiring though, because once the sparrows were all killed it allowed the proliferation of crop eating insects.

is the the swelling of fluid accumulation in the body tissues. As shown by the picture most of accumulation happens in the feet and ankles. Edema can happen when a person is deprived of certain vitamins during starvation. Many people underwent starvation within the People’s communes.

The Cold War lasted from 1946-1991, the conflict was between communist countries such as Russia, and the democratic countries such as the United States. The major tensions during the war were: political conflict, military tension, proxy wars (Korean War, Vietnam War) and economic competition. Click on the map to learn more.

Both sides of the “war” used propaganda to manipulate the masses. This is the province where Joy’s Father, ZG, went to receive his punishment for criticizing Mao’s Communist regime. Click here for more information. As noticed by the map above it is near Shanghai, almost only a train ride away. Click on map to learn more about the province.

The Bombings of Shanghai

In 1937 the Japanese launched their attack upon China. The war began on August 14, when the Japanese attacked Shanghai with an air raid. Bombs fell upon the intersections of Nanking Road and The Bund. Two more bombs fell on Avenue Edward VII. Around 1,740 were killed and 1,873 were injured. Click on picture learn more about the event.