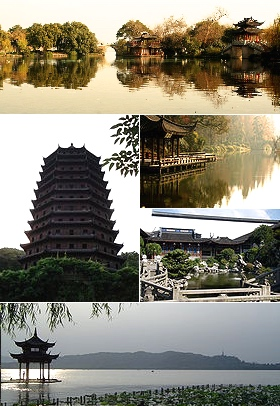 Click here to learn more about the history of Hangchow, also known as Hangzhou.

Click here to learn more about the Hollywood Road.

Hollywood road is in Hong Kong, and it is a street full of Antique shops and open air-markets. Other landmarks present in the road are the Man Mo Temple and the Central District Police Station. The Man Mo temple was built in the 1800’s and it is a temple that worships the gods known as Man the god of literature and Mo the god of war. to learn more click here.

The Central District Police Station it was built in 1864. Its architecture is that of Victorian and Ewardian roots. It functioned as a prison, dormitory, and police station, but was closed down after WWII and moved to Wan Chai. Click here for a map.

Long known for its antiques shops, Hollywood Road is now becoming an arts district with galleries and design shops.

“So, out into the streets. Hong Kong bustles with life: flower and bird sellers, street markets, British businessmen in three-piece suits, beautifully dressed women holding umbrellas to shield them from the sun. I would say that Hong Kong is just a bigger, gaudier, richer, more cosmopolitan version of then I’d have to admit that it isn’t like my adopted home much at all, except for the food, the dreams of white tourists, and the Chinese faces. I could say Hong Kong is closer to how I remember Shanghai, with its lively waterfront, the sex and sin for sale, and the smells of perfume, coal, and delectable treats being cooked right on the street” (See 46).

Hong Kong is a special administrative region located on the southern coast of China. Over the years, Hong Kong has grown over the years physically and economically. Hong Kong, meaning “fragrant harbor”, is a renowned waterfront being known for one of the world’s center of trade and industry.

Click here to read an article written by The Atlantic Report in June1957 that described Hong Kong.

Click here to learn more about the establishment of Hong Kong.

Click here to learn more about the history of Hong Kong.

Click here to read quick stories about how Hong Kong got its name.

Brick Factory in the Hebei Province

Huaihai Road used to be known as Avenue Joffre which was part of the French Concession. Now Huaihai Road stands to be a major shopping and entertainment center with around 400 stores. Click here to learn more about Huaihai Road’s history.

These are known as the “Yellow Mountains” of China. These reside in the Anhwei Province of China where it is now under the protection of the State Council of the People’s Republic of China as of 1982. It is home to many endangered species and has inspired many artists with its scenic beauty. Click here for a brief description. Kowloon meaning “nine dragons” is a peninsula in Hong Kong. It is known for its Walled City that was originally built as a Chinese fort. Kowloon is one of the most densely populated cities. For a long period of time, it was under British rule.

Click here to learn about Kowloon with provided pictures.

Click here to read about the history and background about Kowloon.

Click here to read about the origins and early beginnings of Kowloon.

The Lo Wu Bridge is the border between Hong Kong and mainland China. It is a bridge suspended above Sham Chun River in the North district, New Territories, Hong Kong. Today there is even heavy government control among the bridge today because of its use for tranporting immigrants and illegal drugs. Click here for more information.

The Lunghua Pagoda (Longhua Pagoda) stands in front of the Longhua Temple, and the two often go hand in hand together. The temple was supposedly built around 247 A.D, and the pagoda apparently along with it. The pagoda is the temple’s tallest structure, made of both brick and wood and standing over 40 meters high. It has been rebuilt many times throughout it’s history, but still stands tall beside the Longhua Temple.

Click here for an introduction to the Longhua Pagoda.

Click here for a closer look at the Longhua Pagoda, and learn more about pagoda’s in general.

Click here for a website that provides in depth look at the Longhua Pagoda and also the Longhua Temple, including it’s history, legends, what’s inside, and more.